Bob’s Total Knee Replacement Journey – Cindy’s dad, Bob, is scheduled to have total knee replacement surgery tomorrow. We will be following his journey along the way. We hope you find this helpful! – – Cindy & Christina 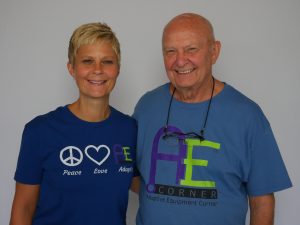 Tomorrow is Bob’s big day. He is having total knee replacement surgery on his right knee. 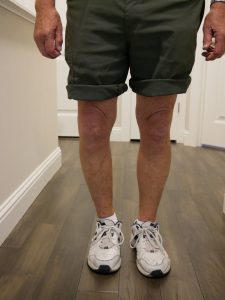 Pre surgery: Notice the swelling and outward bowing of the right knee. Also the changing of the angle at his right ankle.

Notice Bob’s limp and that he is leaning toward the right. It is especially noticeable as he is walking away.

Bob’s Total Knee Replacement Journey – Bob feels a little fidgety, pre surgery, but thinks he will feel better once it’s over. His advice is, “If you have daughter that is a Physical Therapist listen to her all the way through, I think.”

Today was the day! He also had his first day of physical therapy. Although he didn’t walk  today, he did have to stand at the side of his hospital bed and bear weight through his legs. Surgery day was a tough day!

Bob’s Total Knee Replacement Journey – Two days after surgery and Bob is learning how to go up and down stairs in physical therapy. When he goes up stairs the PT reminds him that the good foot goes “up to heaven” and when he goes down stairs she reminds him that he goes down with the bad foot. One of our YouTube channel viewers commented on our “Using a Cane on the Stairs” video that he remembers it by saying, “Ascend with the angel and descend with the devil”.

Bob got to return home this afternoon. Now he will begin home health physical therapy and the real recovery begins! 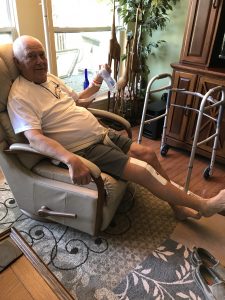 In addition to physical therapy, Bob has to wear this Continuous Passive Motion (CMP) machine several times a day, every day. A CPM machine is used to help regain range of motion in the knee after surgery. It slowly bends and straightens the knee during use. 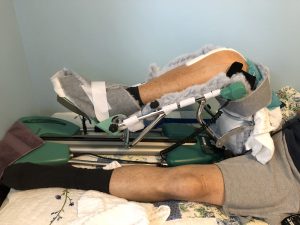 Part of Bob’s therapy for recover from total knee replacement surgery is to use this CMP machine.

Today was one full week post surgery. Bob says he’s very happy he had it done well, he expects he will be happier but he is “getting happy”! Looking good, Bob!

Today Bob is 2 weeks post knee replacement surgery. Here’s what he had to say:

Bob’s Total Knee Replacement Journey – During Bob’s 2 week post-op interview he reports that he has soreness but quite a bit of flexibility. He had a physician assistant (PA) appointment today who told him that he was pleased that Bob did not have swelling and wasn’t “overcome with pain”. His PA was happy to see that he had worked out a good regimen of ice, pain medication and exercise. Bob said, “there is a certain amount of pain a person has to work with and get used to and it just gets a little better a day at a time.”

He denies pain while he is sitting for this interview but when he gets up to walk its about a 5 or 6. It becomes a 6 if he “twists a little”. Bob said he is happier today, more than yesterday about his decision to have surgery. He feels that it will take another week before he can say, “Wow, I am really happy!” He admits that he can now see this decision to have surgery was the right one for him.

Bob’s Total Knee Replacement Journey advice to others considering having a total knee replacement surgery is, “if you’re having enough pain that it is affecting your walk or your lifestyle then you have to decide to trade that off. If you want to get back to doing things you want to do then you need to just bite the bullet and do it. It’s not a piece of cake but if you’re having pain and it keeps getting worse then its worth it.”

Bob used to enjoy taking walks and going to the YMCA. He feels that in about 2 more weeks he will be done with home physical therapy. Up next in his journey will be outpatient physical therapy for a week. He hopes to return to a routine at the YMCA.

Check out our video on What is a Leg Lifter and How to Use it.

Bob said he beginning to see that having knee replacement surgery was the right thing for him and says:

Today Bob is 3 weeks post knee replacement surgery. Here’s what he had to say:

Bob’s Total Knee Replacement Journey – Today is Bob’s 3rd week post total knee replacement surgery. He reports his pain level is a 2 or a 3 depending on how much activity he participates in throughout the day. Bob completed his home health physical therapy on September 28th and is scheduled for outpatient physical therapy evaluation tomorrow where a plan of care will be developed.

Bob feel that he is walking “fairly well” but occasionally gets a “glitch” or a “zinger” on the outside of his knee. He says the “zinger” is pain that he gets when he goes from sitting or lying to standing but that he is able to alleviate the pain by putting his foot down and “working through it” and that it is “fine” then. He knows that building up strength in his upper leg will help him with standing and using the stairs.

As far as adaptive equipment is concerned, Bob is using only a cane when he walks outside but it is mostly “for confidence”. He is continuing with balance exercises and feels that this “seems to be helping” especially in the last “couple of days”.

Bob’s words of wisdom this week is to try and figure out when you will need to take medication to allow for better participation in exercise and when there will be an increased demand for walking during the day. His biggest recommendation is: “ICE, ICE, ICE”.

Today Bob is 4 weeks post total knee replacement surgery. Here’s what he had to say:

Alright Dad, you are on your 4th week after surgery and how are you feeling today?

I’m feeling really well today. I had physical therapy. I started outpatient physical therapy. This is my second week of that, second full week and I’ve had three sessions per week. For the last, well, a week ago, one of the things that occurred that I didn’t expect was a real sensitivity that flared up around my knee surface, and just kind of subsurface and people are telling me it’s because of the nerve endings and everything are coming alive and that kind of thing.

Kind of like beestings. I’ve had shingles before and it felt a little bit like shingles. Only it was just like a circle, like right around my knee. Sensitive to bedcovers of a night almost I would say kept me awake more than pain in my joint and in my muscles sometimes. But, that seems to be doing better today. Yesterday and today, basically. And what they’re woking on in therapy is mostly strengthening. My upper leg and front and back both. So that I, and one of my challenges in therapy right now is becoming steps. I mean I’ve been able to do them like, you know, lead with the good leg and all that kind of thing. So now I’m trying to get to a point where it’s tracking leg, leg, leg but this takes a little more strength.

Are you having pain right now, today?

Just out of therapy, I would say it’s like a 3 or a 4. But I took a regular Tylenol about an hour before therapy which would have been about 8:30 and now it’s 12 and I think that after and having one of those plus therapy and saying it’s around a 3 is not too bad at this point. I’m feeling pretty good.

Now are you still using any assistive device for walking?

No. I haven’t probably for a week. Before that I kind of off and on used things but I would say more consistently for the, a week ago I probably gave up all those things and got more confident.

And how are you feeling today about having had the knee surgery?

I had a discussion with my brother who’s had a knee replacement and he asked me that same question about the pain before surgery and the pain right now post surgery and I told him that I thought they were almost about, they were close to the same, right now and that probably in the next week or week and a half my pain will decrease and I will be happier and happier every day that I did this. So, I think I’m very close to that same point. Unfortunately, he didn’t have enough pain before he had his to quite appreciate that as much as he would like to have but, I’m appreciating it.

Very good! Well, I’m proud of you. I think you’re doing a great job and we’re going to check in with you next week. And as we say Pop, if you can’t do it…

AECorner2015 - We educate and instruct individuals and caregivers on ways to stay safe during daily care activities. Find helpful tips, resources and videos that help maintain seniors dignity and functional independence at home. ✌️❤️ Christina & Cindy "If you can't do it, ADAPT IT!"
Next

Do you find our content helpful? Make a donation to support our efforts 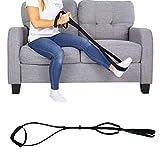